Willy soon developed a breakfast routine designed to please even the fattest of fat cats.  He ate breakfast and sipped milk at home first.  Then headed next door to my sister’s house, where he ate breakfast and sipped milk again.  Evelyn knew what Willy was up to, but never let him go the least bit hungry.
I never left Willy at home alone.  He always stayed at my sister’s place next door when I went to school.  There he played with my nephew, David, all afternoon.  David was only five at the time.  He had one of those child sized, toy shopping carts.  David would stuff Willy in the cart and take off down the hall.  When David came to the end of the hall, he would stop and turn so fast Willy would fall out of the cart.  So David would stop, and Willy would jump back in the cart.  Then David and Willy would take off back the other direction.  David would stop, Willy would fall out, and the whole process would start over again.  They could keep up the whole process for almost an hour before wearing each other out.
Posted by panhandlr at Saturday, February 05, 2011 No comments:

It all began one fall evening with two small children finding one tiny yellow tabby kitten they named Willy.  To this day I can still close my eyes and hear my nephew’s voice,
“Look what we found”!
I was living alone, barely twenty and away from home for the first time.  So naturally I took this tiny yellow fur ball home, where Willy ruled from that day forward.
Despite Willy’s diminutive size, he could yell louder than any full-grown lion and quickly learned how to attract the attention he required.  Thanks to Willy’s persistent vocal requests, he soon grew a nice round, solid belly.  Willy became a master at convincing all humans that cats rule and require dinner, snacks, attention, and playtime instantly upon request.
On one occasion, Willy helped himself to an entire freshly popped bowl of popcorn.  I set the bowl on the coffee table and left the room briefly.  Upon my return, I discovered a certain white tipped yellow tail sticking straight up from inside the bowl.  Willy was still small enough to stand with all four feet in the bowl with only his tail giving away his presence.  Willy was happily munching away, until he was caught……..
Posted by panhandlr at Friday, February 04, 2011 No comments:

After Mo got old and passed away, it seemed lonely around here with only Jackie for company.  So when a beautiful Gordon Setter desperately needed a better home, I took him in.  I've never owned a dog.  It was a totally new experience for me.  And to adopt such a big old fellow for my first dog was down right intimidating.  But Griff was such a gentle old soul.

The former owners said he didn't like cats.  Griff had to "learn" that one cat, Jackie, was a cat he better like.  Two blasts in the face with water courtesy of the garden hose taught him well.  Griff wouldn't even look at Jackie for months after the garden hose incident.  Yet he decided if Jackie belonged to me he better take care of him, too.  Thus Griff became Jackie's bodyguard.  I never worried about leaving Jackie outside after Griff came along.  Griff would defend Jackie from any stray critter that dared to enter the yard.  Cat, dog, snake, you name it, Griff took care of it.

Sadly I don't have any digital pictures of my stately old Griff.  He passed away before I bought a digital camera.  He had many good days before he died.  I honestly think his years with me were the best years of his life.  His former owner kept him in a small pen all the time.  Griff had the run of almost two acres here courtesy of an electric radio fence.  I spent many hours teaching him to stay inside that electric fence.  He respected it well and never tried to run through it.  And oh did he ever love to run.  Every night when I arrived home Griff would show me how fast he could run across the front yard and back to the garage to meet me.

Some people thing an electric radio fence and collar are cruel.  I think they are the only alternative to a fenced yard.  Without this invention Griff would have been chained up all the time.  With it he ran free throughout the yard all day.  I have a Lab living with me now.  I had to run the fence wire along an old wood fence since the Lab was breaking boards off to get out.  So a regular fence isn't a perfect solution either.
Posted by panhandlr at Thursday, February 03, 2011 No comments: 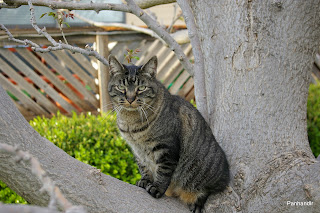 I guess Jackie thought he could climb trees......NOT.

I don't have a picture of him on sentry duty in the bedroom window.  He watched for hours.  I always knew when something wasn't "right" outside.  Jackie would leave his window and run through the house checking the other windows for another view.  Then he would run back to his bedroom window for another look.
Posted by panhandlr at Thursday, February 03, 2011 No comments: 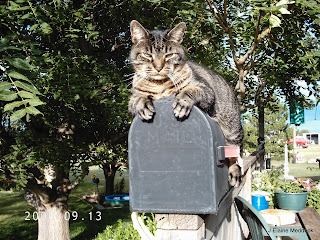 I'd still like to know how Jackie thought he was going to get down from there?  No wonder his back was in such lousy condition.
Posted by panhandlr at Wednesday, February 02, 2011 No comments: 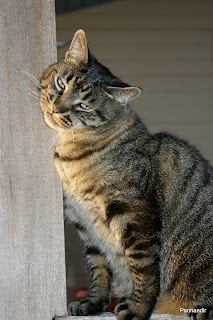 Jackie passed away January 5th.  He was a fat, but cuddly old Manx kitty.  Jackie was a little over thirteen years old.  He was getting cataracts, and he had three damaged discs in his back.  He wasn't a particularly interesting old fart.  He was just a big spoiled lap baby that liked to sleep in a sunny window all day.  And on a cold winter night, he preferred to sleep tucked under the covers with his head resting on my pillow.  See what I mean about spoiled?

Jackie came to me courtesy of my nephew, David.  David brought me cats before, so no surprise there.  David and Jackie were staying with me temporarily while David went to school here.  While Jackie and his master were here, my old cat, Willy, passed away.  When David left, he gave Jackie to Mo so he wouldn't get lonely.  So I had two cats again instantly.  And Mo loved his Jackie.  Mo bathed him and brought him hunting "prizes".  So one cat spoiled the other.
Posted by panhandlr at Wednesday, February 02, 2011 No comments:

panhandlr
I live in the Oklahoma Panhandle. Hence the reason I use Panhandlr for a domain name. I work in truck safety, and love to ride motorcycles, read, and play with my critters.